Create an Account - Increase your productivity, customize your experience, and engage in information you care about.

About the Bedford Fire Department 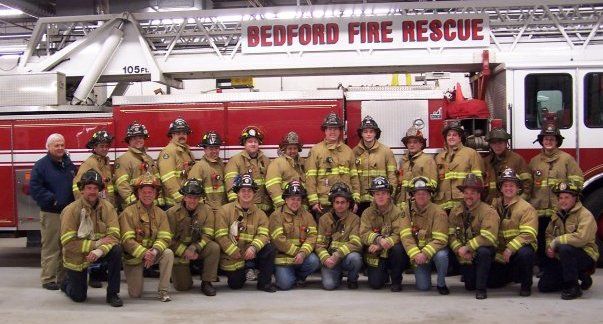 (why we exist): The mission of the Bedford Fire Department is to strengthen the safety of our community through planning, preparation, emergency response, and risk reduction.

(what we strive for): The Bedford Fire Department will be a community leader that provides the level of safety that is expected by those we serve.

(why we come to work): Making our community better every day.

The Bedford Fire Department was formally established in 1922. Previously, the Town relied on Piscataquog Village for fire protection. Its first elected Chief was Harry Hilchey. The first Fire Station was erected in 1930 behind the Town Hall. The fire station remained in that location until 1994 when it relocated to the present Public Safety Complex. Also in 1930, the Town bought a new fire truck: The Sanford, which remains with the Town today. From the day it arrived, it has been a source of pride for the Town and especially the members of the Fire Department.

The Bedford Fire Department protects approximately 24,000 residents living in both a rural and suburban area of 32.83 square miles in southeastern New Hampshire. The community of Bedford is evolving. At the confluence of several major highways, Bedford has developed in its residential settings and its commercial areas. We are proud of our diverse community and our commitment to maintaining the highest level of service for our residents, visitors and businesses.

The Bedford Fire Department is an all-hazards response and risk reduction department answering around 3,000 calls in a year, the majority being Emergency Medical Services responses. Other responses include fire, hazardous materials, motor vehicle collisions, technical rescue. The fire department actively works to reduce risk in our community through education and code enforcement.

In addition to responding to Fire, Emergency Medical, and Rescue calls, each shift is also responsible for maintaining their preparedness through training and professional development.

The Communications Division for the Town of Bedford is staffed with 9 civilian personnel, who dispatch for the Bedford Police & Fire Departments.  They are located in the Bedford Safety Complex on Constitution Drive. They dispatch on 156.180 MHz with a PL of 94.8.

Major roadways include State Routes 101, 114, and 3, as well as Interstate Highway 293 (with a portion of this being the Fredrick Everett Turnpike). During the rush hour periods these roadways, as well as the town roads within the mall district, are routinely grid locked. This results in many serious motor vehicle accident responses, as well as extremely stressful emergency driving conditions.