Create an Account - Increase your productivity, customize your experience, and engage in information you care about.

The Patrol Operations Division is under the direction of Captain Scott Plumer.  Captain Plumer has been a police officer since 1995 and has been employed by the Bedford Police Department since June, 2000.  He was a Field Training Officer prior to being promoted to Sergeant in July, 2003 and was promoted to Lieutenant in February of 2013.  He became the Commander of the Communications & Records Division at that time.  In January of 2018, he was promoted to Captain and reassigned to the Patrol Operations Division.

The word "patrol" is used in its broadest sense. It is considered to be a primary law enforcement function and embraces much more than the act of patrolling. This is the core service element of the Department that comprises the bulk of agency resources in order to satisfy the public demand for law enforcement; crime prevention and deterrent patrol; highway safety; community policing, as well as non-law enforcement related public safety and problem solving services.

The effective delivery of timely public safety services that successfully prevents, deters, and solves crime as well as addresses highway accidents, enforce traffic safety laws/regulations, and responds to critical life-saving calls-for-service is contingent upon the availability of Patrol Division resources (uniformed police officers). The patrol division utilizes Compstat to track and address crime. Compstat offers a dynamic approach to crime reduction, quality of life improvement in Bedford, and personnel and resource management within the Department, whereby the Bedford Police Department identifies spikes in crimes using comparative statistics and address those spikes through the use of targeted directed patrols and  “Hot Spot” enforcement.

The Patrol Division’s concurrent priority to respond to calls-for-service and solve public problems in combination with community programs forms the critical elements in achieving the public’s expectations for safety, security and the reduction of harm in the Town of Bedford.

Concomitant with this expectation is the requirement to execute the mission of the Department with the greatest degree of efficiency and effectiveness to maximize the utilization of public resources (tax dollars) by measuring performance and progress toward annual crime reduction, highway safety and community policing goals and to continue to maintain Bedford as one of the safest communities to live, work and enjoy in the State of New Hampshire. 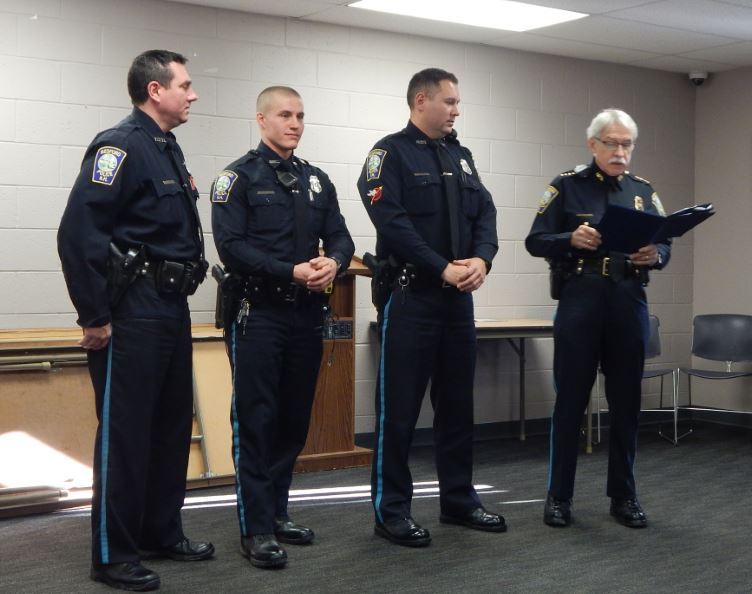 The traffic division is responsible for traffic enforcement and investigating motor vehicle accidents throughout the town of Bedford. The Bedford Police Department is equipped with a 2015 Harley Davidson Electraglide. The police motorcycle is used to help the traffic division with lowering traffic violations and is a great community policing tool for the department. The Traffic Division is also equipped with two Radar Trailers. The radar trailers are set up at various locations in town and helps remind residents and visitors to watch their speeds. All motorcycle officers are required to attend a certified Harley Davidson motorcycle school before being allowed to operate the police motorcycle.

The use of police bicycles instead of cars can make police officers more easily approachable, especially in low-crime areas. Bicycles can also be issued to police officers to enhance the mobility and range of foot patrols. Bicycles are also effective crime-fighting tools when used in densely populated urban areas. The bikes are nearly silent in operation and many criminals do not realize that an approaching person on a bike is actually a police officer. Furthermore, if the criminal attempts to flee on foot, the riding police officer has a speed advantage while able to quickly dismount if necessary. All mountain bike officers are required to attend a week long school to be certified to ride the mountain bike.

Vehicular accident reconstruction is the scientific process of investigating, analyzing, and drawing conclusions about the causes and events during a vehicle collision. Reconstructionists are employed to conduct in-depth collision analysis and reconstruction to identify the collision causation and contributing factors in different types of collisions, including the role of the driver(s), vehicle(s), roadway and the environment. The laws of physics and engineering principles such as the conservation of linear momentum, work-energy methods, and kinematics are the basis for these analyses and may make use of software to calculate useful quantities. The accident reconstruction provides rigorous analysis that an expert witness can present at trial. Accident reconstructions are done in cases involving fatalities and serious bodily injury accidents. In 2010 the Bedford Police Department purchased a state of the art Nikon “Total Station.”   The Total Station is used to produce professional accident diagrams and measurements.

HELP KEEP AN EYE ON BEDFORD – SEE SOMETHING – SAY SOMETHING

HOW CAN YOU HELP?
•       Report any suspicious or out of the ordinary activity to law enforcement
•       Stay alert and tuned in to your surroundings, wherever you are
•       If you’re coming or going after dark ark in well-lit area that will still be well-lit when you return.
•       Try to plan your visits to an automatic teller during the day, rather than after dark
•       Learn about warning signs that your child might be involved with drugs or gangs
•       Teach your child internet safety tips. The people they talk to online might not be who they say they are
•       Make sure all doors to the outside have good, sturdy locks
•       Trim any bushes or trees that hide doors or windows. Keep ladders, tools, toys, and recreational equipment inside when you’re not using them
•       If you hear a noise that sounds like someone breaking in or moving around, quietly call the police and wait calmly until they arrive. If you can leave safely, do so. Otherwise lock yourself in the room you are in